Two models per study or one?

In an earlier post this week, I proposed a method to store a study with a simple shape - ICPSR 8475 which is the American National Election Survey (cumulative file, 1948-2004) - and put it into Fedora. This method used a Content Model for the study, and then two separate Content Models for the main content, one for the data file and one for the technical documentation. This translated into a pair of Fedora objects that would look something like this: 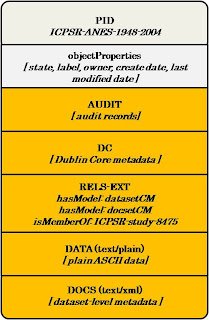 Two separate Content Models is probably over-engineering for this study, but it makes sense for a more complex study. Let's take a look at the Intensive Community Study, ICPSR 6849.

This study features many pairs of data files that share a common codebook. In fact, all but one of the data files are part of just such a pair. In this case bundling the documentation directly with the dataset could lead to duplication in the repository, or the creation of special-case rules in software, and so instead we separate the content into three separate data objects: ICS data, ISR data, and the shared documentation: 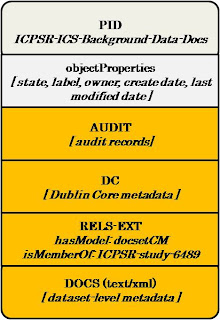 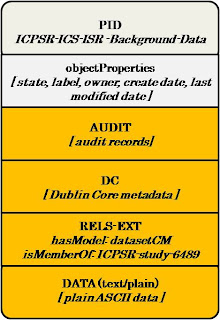 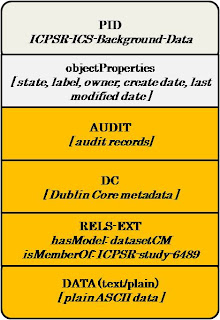 We also have a parent-level data object, the study, which serves as a container for these three data objects, plus many other trios of similar pairs of data files with a shared codebook: 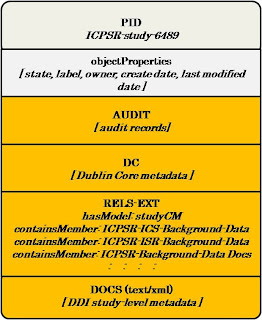 In this case the study data object would actually have many more values stored in it's RELS-EXT datastream than are shown above.
Posted by Unknown at 7:26 PM No comments: 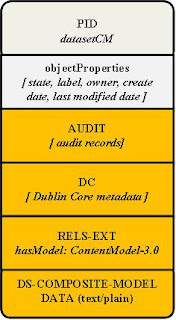 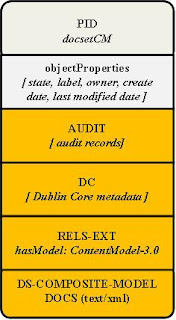 My sense is that the "dataset" is the atomic object of interest. Heading down to the variable level feels too fine-grained for a system like Fedora. And so this led to creating two pretty simple Content Model objects: 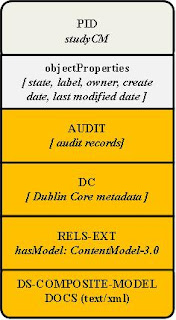 I thought I would also need a Content Model for the basic unit of dissemination we use:

A simple study at ICPSR, say 8475 which has one data file and one documentation file, might then consist of a pair of Fedora data objects. I'll list the persistent ID (PID) first, followed by a list of datastreams in parentheses.

The RELS-EXT datastream would express relationships to show that it contains two members, a Data object following the Dataset Content Model, and a Data object following the Docset Content Model. The RELS-EXT datastream would also assert a hasModel relationship to the Study Content Model. We also need a mechanism for storing access controls and license terms, but I'm still learning about the XACML stuff that might be a good way to do this. It may also make sense to have a datastream for DDI 2.x metadata and one for DDI 3.x metadata rather than just a single one.

Likewise, we would also have:

Next: So why two different Content Models, one for data and one for documentation, rather than just a single one?
Posted by Unknown at 7:31 PM No comments: