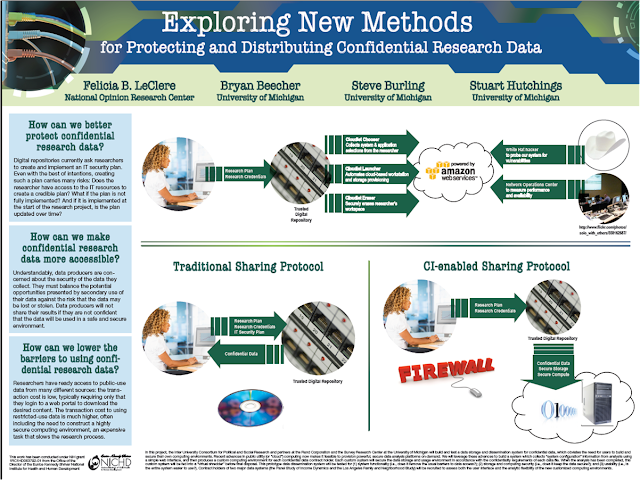 A few of us presented a poster and attended a recent symposium called CI Days at the University of Michigan.  This was one of several similar events that the NSF has been funding across the country.  The local event was hosted an organization led by Dan Atkins, who is back at the U-M after serving as the Director of the Office of Cyberinfrastructure at the National Science Foundation.

The event started with an evening reception and poster session on how staff and researchers at the University of Michigan are using cyberinfrastructure in their work.  Our poster (shown above as a clickable image to the full-size poster) highlighted our work on our NIH Challenge Grant to study how one might use the cloud to more effectively share and protect confidential research data.  Kudos to Jenna Tyson at ICPSR who designed and built the final submission.

Most of the posters were from grad students, many of whom were in the College of Engineering.  In addition, ours had much, much less small-print text, and our experience was that this made it easier for people to stop by the poster, actually read the words, and then engage in a conversation.  People expressed a lot of interest in how we were using the cloud, and how we were intending to protect the data.

A day-long event featuring keynote speakers, CI users, and CI providers followed the poster session.  Jimmy Lin gave the opening keynote address.  I found Jimmy's talk to be both interesting and educational.  Jimmy proposed that computer scientists need a new paradigm for computing, something more abstract than the classic Von Neumann computing architecture.  The problem is that software developers and computer scientists spend too much time debugging race conditions and locking rather than inventing new and better algorithms and methods.  "The data center is the computer" was Jimmy's tag line.

I attended several breakout sessions, but the one with the best takeaway for me was Andy Caird's session on Flux, a developing bit of U-M CI for large-scale batch processing on a Linux cluster.  At ICPSR I don't often come across requests for significant computational resources like this, but the next time that I do, I'm going to contact Andy.

The final keynote was given by Larry Smarr.  To again grossly summarize a very interesting talk, just like I did with Jimmy's above, Larry's talk encouraged the audience to bridge the gap between the high speed networks that one finds in a machine room or within the control plane of a computing or storage cluster and the much slower networks that form our campus intra- and inter-connects.  Larry gave several compelling examples of where very high speed end-to-end network connections enabled capabilities and interactions well beyond the common videoconference and the downright prosaic teleconference.

The event wrapped up with a town hall meeting where the audience was invited to give feedback on the event.  I gave the organizers high marks for putting together a nice blend of presentations and informal networking time (not unlike CNI meetings), and suggested that at future events they invite speakers from off-campus who can present "success stories" of how they are using or deploying CI at their institution.
Posted by Unknown at 2:24 PM