I mentioned in the last Kaltura post that we've set up a Custom Data schema to hold the descriptive metadata for our video content.  Setting up that schema took some considerable effort, and I thought I might share some of the details with this post. For context we are using the newly release Falcon edition of the Kaltura Management Console (KMC) web application. 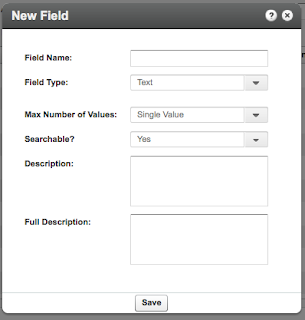 One creates a Custom Data schema by using the Settings menu in the KMC, and then by navigating to the Custom Data tab.  A button allows one to Add New Schema, and I happened to give ours the name of "MET Extension" since that is the name of the project generating the video.  I did not set a System Name for the schema, and while Kaltura said that was required, the KMC does not enforce it, and lack of a System Name has not yet proven to be a problem.

One adds fields/elements to the schema one at a time using a pop-up window, Edit Entries Metadata Schema.  This can be seriously laborious if you have a large schema like mine with 40 elements.  Lots of cutting and pasting.  Kaltura allows one to export the schema as an XSD XML file, but one cannot import such a file to create or update the schema.

Elements can be Text, Date, Text Select List, or Entry-id List.  Each can be single or multi-value, and each can be indexed for search (or not).  The KMC allows one to supply both a short and longer description for each element.

Text fields are exactly what you would expect, and Text Select Lists are basically pick-lists.  The Entry-id field is useful if you want to store the ID of an extant Kaltura object.  Date is a little tricky since the format one uses to supply a value for this field works one way in the KMC interface - conventional calendar format or pick from a calendar widget - but a very different way when ingesting via XML where it expects an integer number of seconds since the epoch.

We will be ingesting tens of thousands of videos into Kaltura, and so we will NOT be using the KMC to upload videos and to compose metadata.  Instead we will be using their Drop Folder mechanism where one puts XML metadata (including pointers to video files) in a special-purpose local location to which Kaltura has access.  Preparing the XML content that includes both the descriptive and technical metadata is our current project, and I'll report on that process - and the Drop Folder process - next.
Posted by Unknown at 6:00 AM